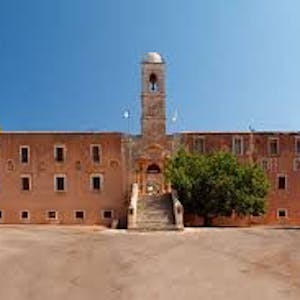 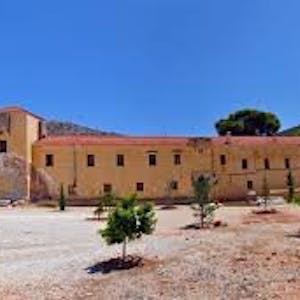 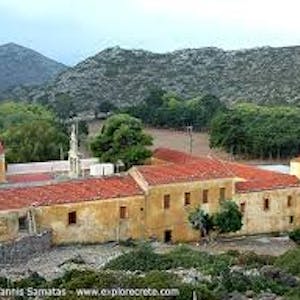 The gorge of Katholiko, also known as To Avlaki tou Agίou (= water channel of the saint), as locals call it, is located at the northern end of Akrotίri, near Chania.  Starting our short journey...

The gorge of Katholiko, also known as To Avlaki tou Agίou (= water channel of the saint), as locals call it, is located at the northern end of Akrotίri, near Chania.  Starting our short journey at the wider area of Chania, we reach the site of Profhetes Elias at Akrotiri, where there exist the Venizelos Graves. From this location, the view of Chania is superb. Historically, the place is significant because it hosted the revolutionary armed forces which realised the autonomy of Crete from the Turkish rule back in 1897. Furthermore, it is the burial place of two of the most important political figures of Greece during the 20th century, Eleftherios Venizelos and his son, Sophoklis. Leaving behind the site of Profhetes Elias, we pass through colorful villages and find ourselves in Aghia Triada (The Holy Trinity) Monastery, established in the early 17th century by the Venetian monks Laurentius and Ieremias Tzagarollo. It is still the biggest monastery complex in Crete and the earliest buildings are perfect examples of the local architecture of their time. The monk community has played an important role in numerous Cretan revolts against the Turkish rule and has been pillaged by the conqueror’s army during the 1821 revolution. The monastery has been renovated in 1854, with the addition of the chapels of the Saint Crucifixion and the Saint Apostles and from 1892, it serves under the Greek orthodox dogma. Our next stop is the Gouverneto monastery (The Lady of The Angels) built in 1537 by monks of the pre-existing Catholic monastery which due to its proximity to the sea, had been attacked on numerous occasions by pirates. The complex resembles to a fortress, having four towers at the respective corners and bearing a considerable fortification. At present, it has chapels dedicated to Saint John the Hermit and the Ten Saints. From here we start the walk all the way down to Katholikon Monastery and we continue all the way to the sea and the same way back to the top. We continue to Marathi beach for swimming before we start driving back to our hotels.

-Don't Forget: This trip is not recommended for people suffering from car sickness, fear of heights or bumpy roads, disabled people or people with mobility problems, children under 13 years old or for any persons who for some reason could have issues joining a trekking tour.

Entrance fees are 5,00€ (as per 2018) for the monasteries and paid on the spot by the guest. In case of any increase entrance fees will alter accordingly.