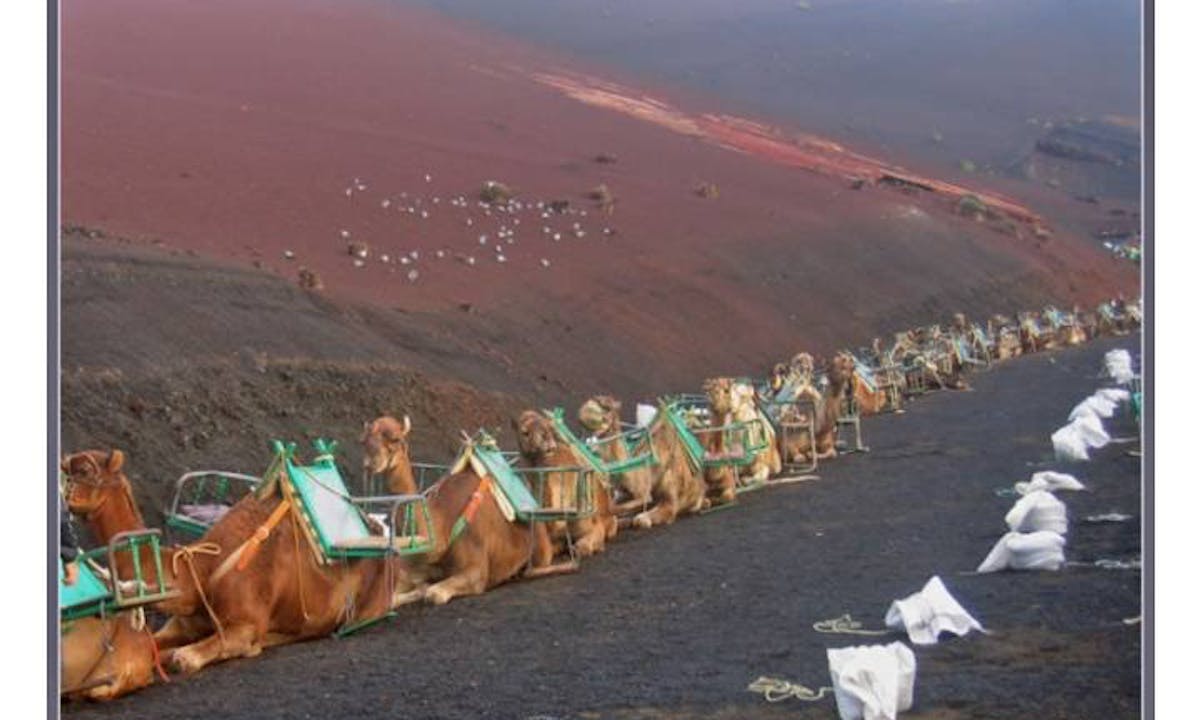 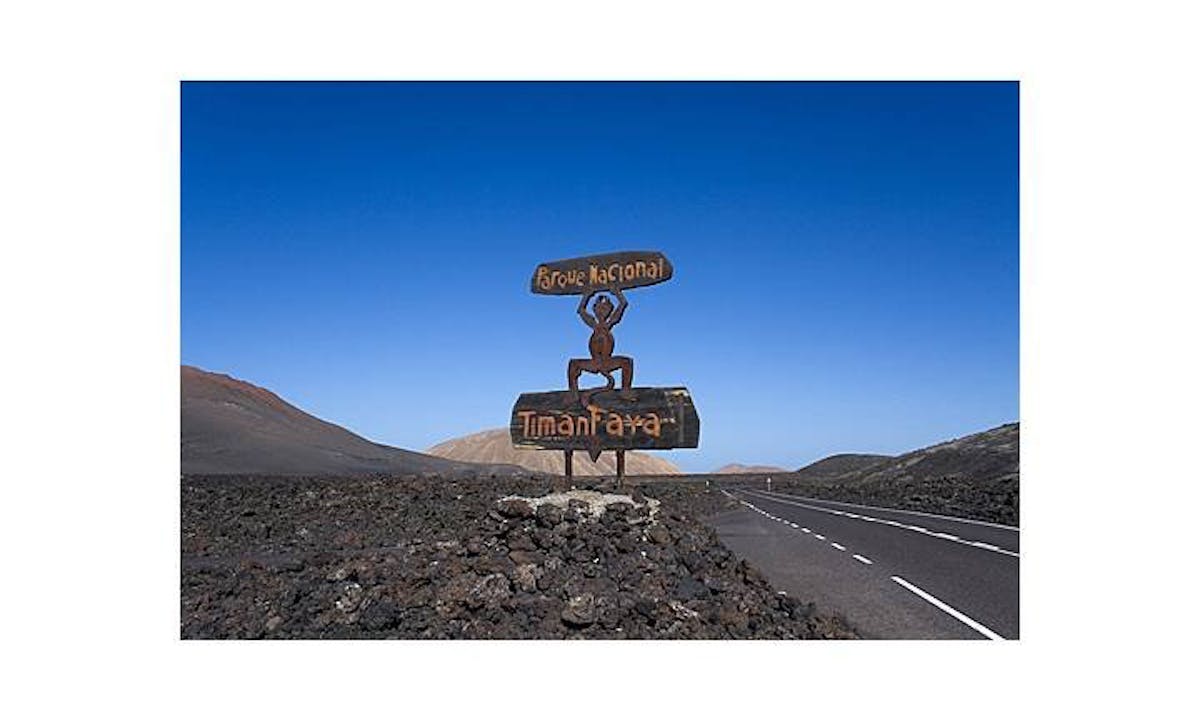 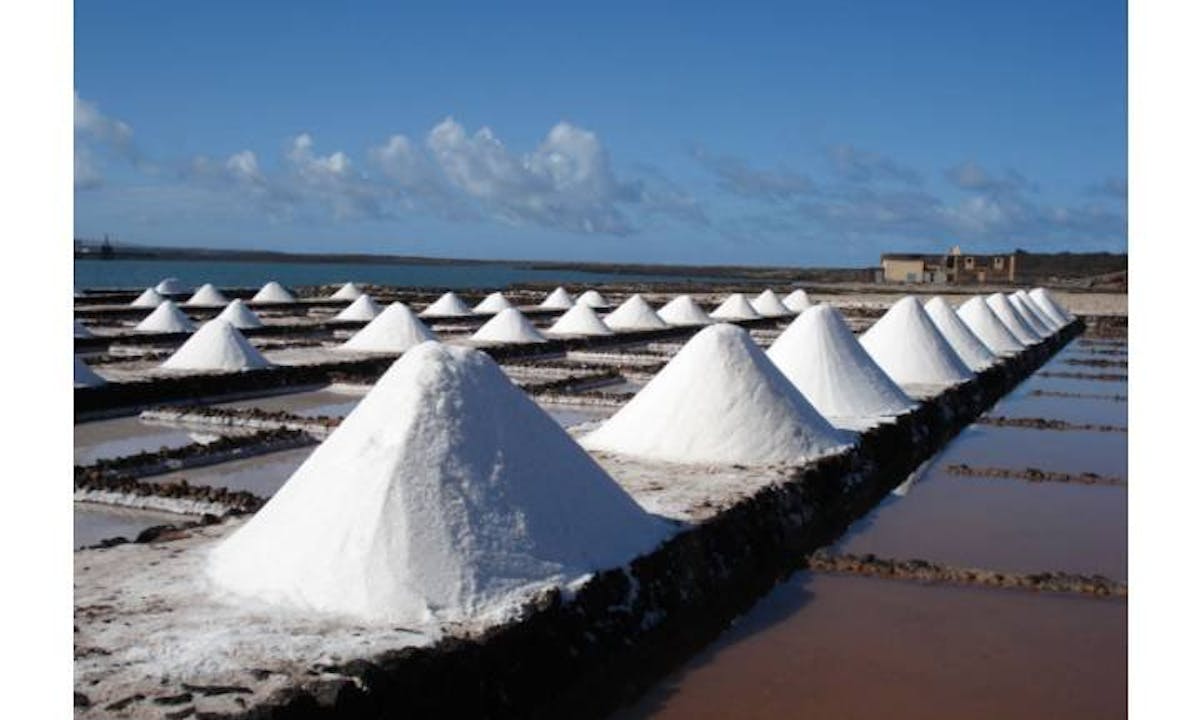 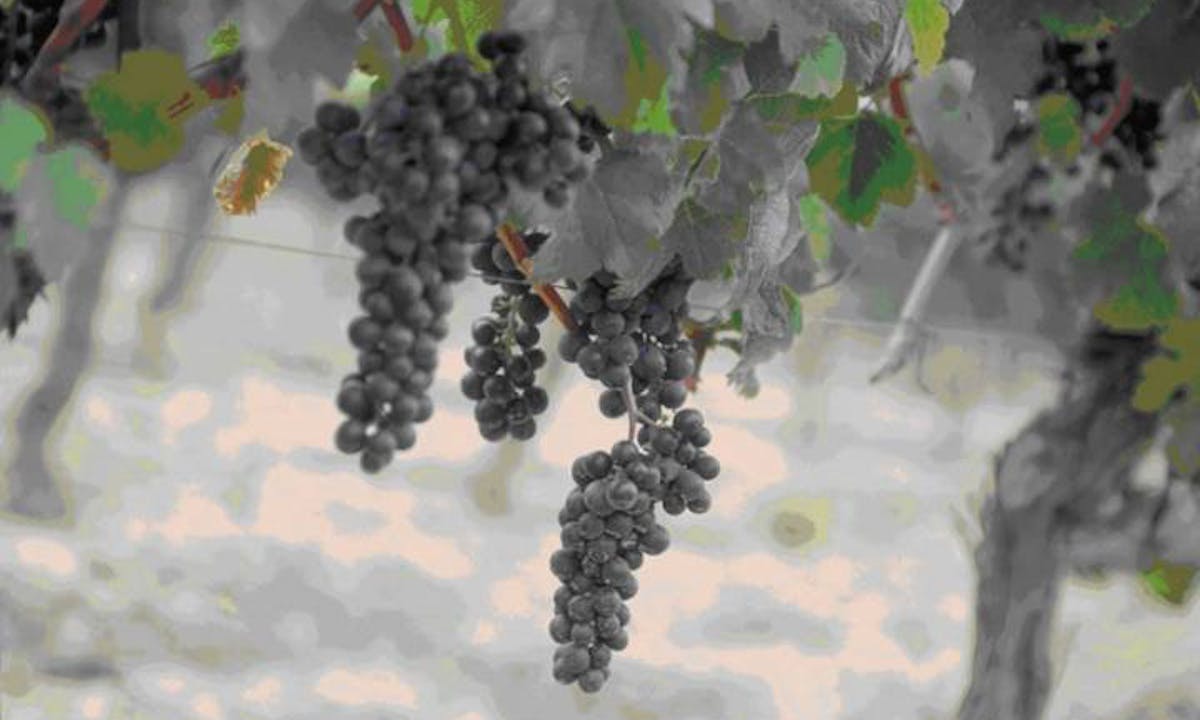 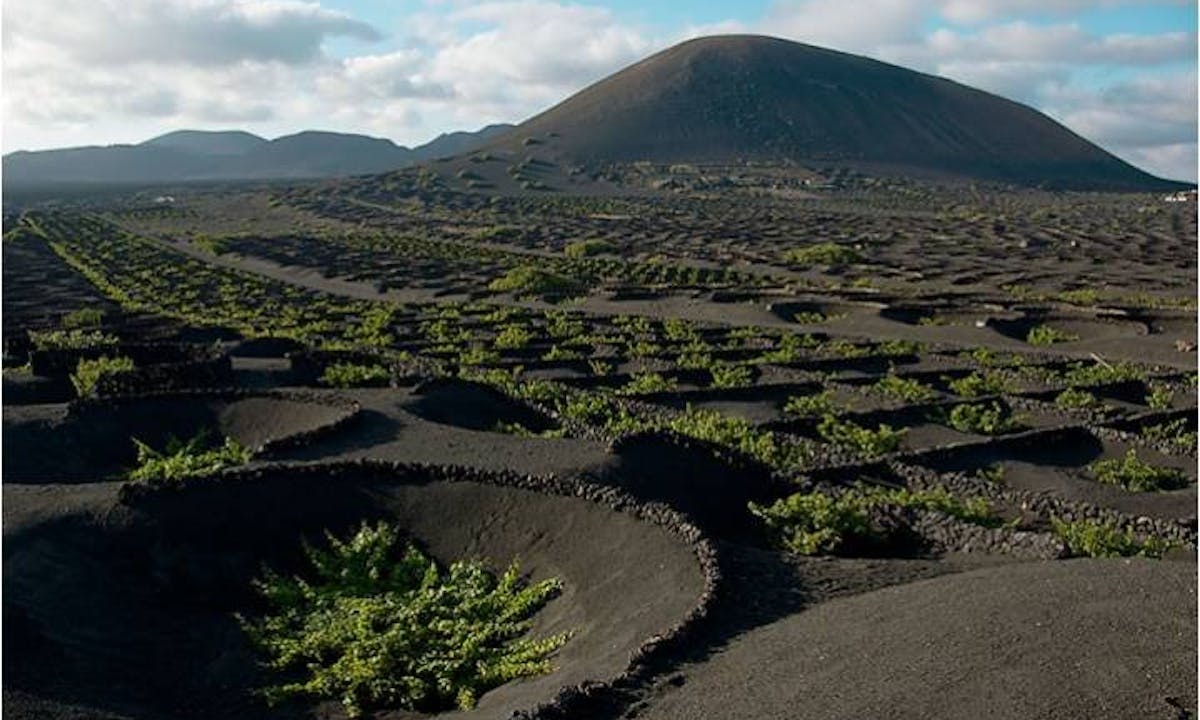 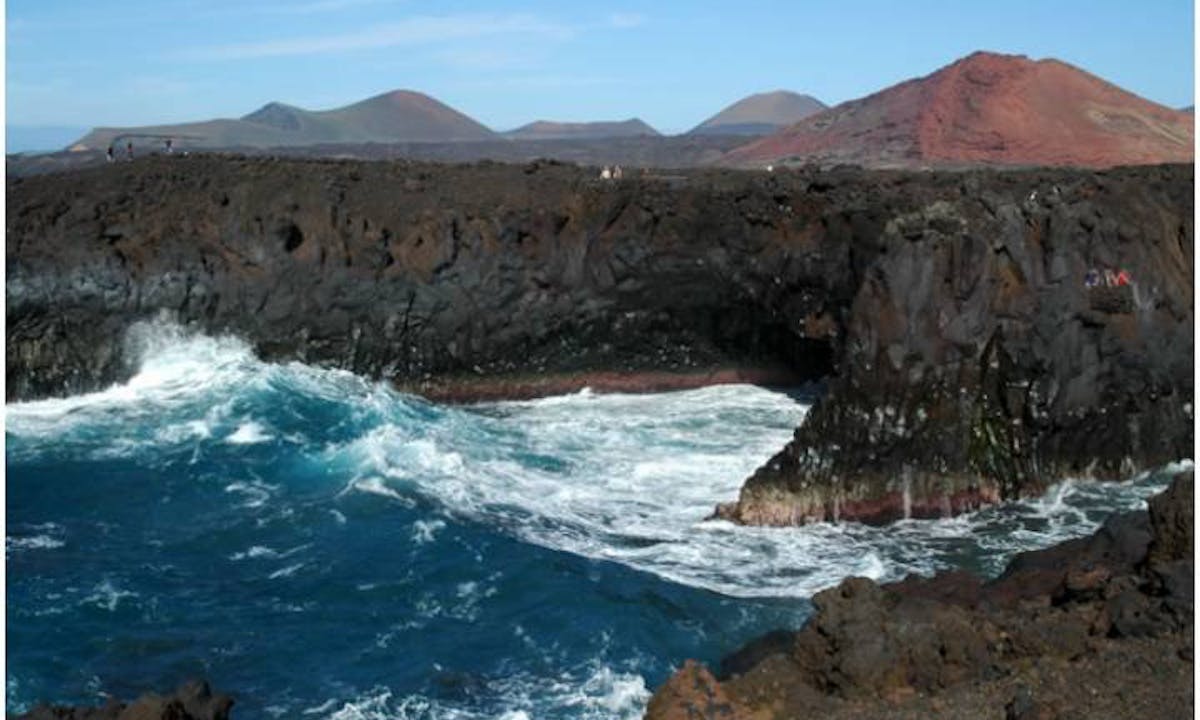 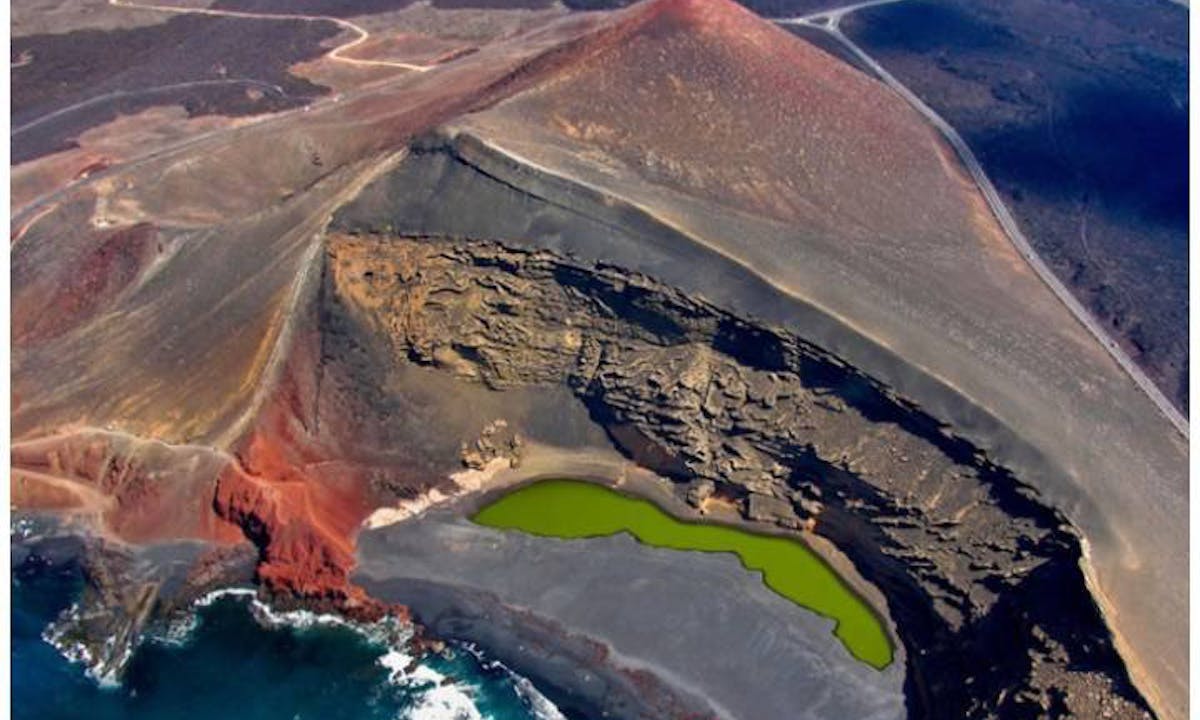 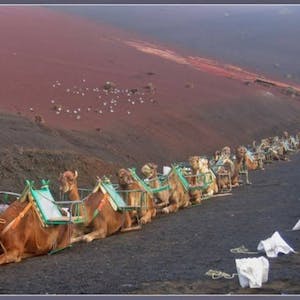 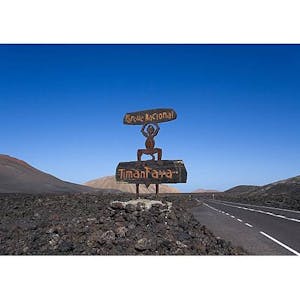 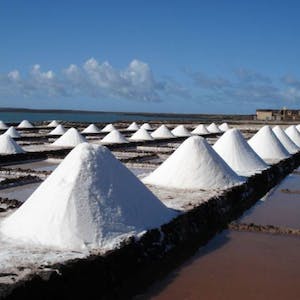 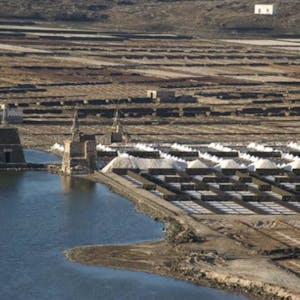 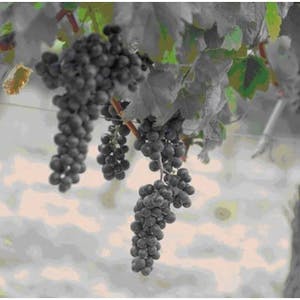 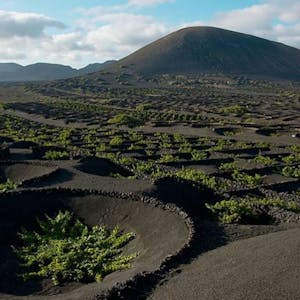 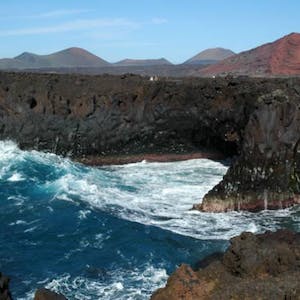 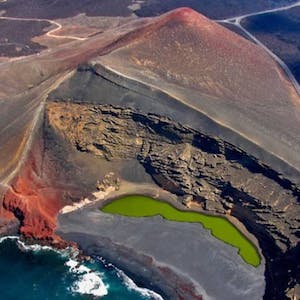 This is volcanism in its purest form! We begin our tour visiting the Timanfaya National Park, with its breathtaking crater route and geothermal experiments. Then, we have the opportunity to take a...

This is volcanism in its purest form! We begin our tour visiting the Timanfaya National Park, with its breathtaking crater route and geothermal experiments. Then, we have the opportunity to take a camel ride*. Our next stop is in the impressive wine growing region of La Geria, continuing from there to Yaiza for lunch*. Refreshed, we continue along the coastal road passing the famous Saltflats before we reach Los Hervideros. There we can imagine the awesome struggle between lava and sea that has shaped this incredible coastline. The last stop is at El Golfo, after a short walk we enjoy a magnificent view of this half sunken crater with the green lagoon on the black sandy beach.

Volcanoes live on stage! We start our trip towards Timanfaya National Park, including the "Route of the Volcanoes". What today has become a symbol of Lanzarote, its volcanic nature full of striking contrasts.

Our excursion goes into the heart of the "Timanfaya National Park" making the "Route of the Volcanoes" in which we see different types of craters combined with vivid multicolours that reflects the origin of the eruption, the materials that it emitted or even the Intensity with which it exploded. We will check the trace of these eruptions that happened almost 300 years ago, when performing geothermal demonstrations, that is, we will check the heat that still emanates from the earth in different ways, all very spectacular.

In another place of the "National Park of Timanfaya", we have the chance to do something that amuses both children and adults: "the camel ride" (* Optional).

Once we leave behind the National Park, the road takes us to the area known as "La Geria", a peculiar wine area and where a very typical variety of Lanzarote abounds, the "Malvasía" a landscape so unique, that will stay in our minds.

The vines are planted in cones formed in the lapilli, called on the Canaries "picón", and protected by small walls of dry stone. Also, fruit trees, like fig trees, are planted in the same way. This form of cultivation allows plants to roast more easily into fertile soil, and the top layer of picón reduces the loss of water by evaporation. A landscape made up of thousands of holes and crescent shaped walls that further protect crops from the wind.

Our remembrances will be more complete if we don´t limit ourselves to just seeing, but also to try, enjoy, and taste the rich wines that a soil as extreme as that of Lanzarote has the honour of producing. Obviously, we are going to pay a visit to a winery and tasted the wine.

We continue our tour along the south coast of Lanzarote, to make a stop in the small coastal town of "El Golfo", in which we will take a pleasant walk to enter a spectacular volcano sculpted by the tides, "El Charco de los Clicos", a small lake of a deep green color that is witness of the micro fauna dwelling these waters of the island. (The adjective green derives from the color of its waters while the term "Clicos" stands for an edible seafood that was usual years ago, in the area, and currently extinct).

Our route takes us for a short stretch to the south to admire the fantastic volcanic landscapes in "Los Hervideros", where the lava acquires capricious shapes, for while still warm got in touch with the cold sea.

Also on the way we can see "Salinas del Janubio", (salt lakes) the largest of all the Canaries and today still active thanks to the support of the EU that declared them natural protected area. The lagoon where the salt flats are found was created by volcanic eruptions building up a lava barrier between the sea and the lagoon that currently has a circumference of about 1000 m and an average depth of about three meters. 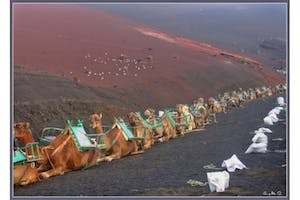