La Pared is situated on the wild, rugged and windswept western side of the Jandia Peninsula’s isthmus in Southern Fuerteventura. Though the narrow strip of land that separates Costa Calma from La...

La Pared is situated on the wild, rugged and windswept western side of the Jandia Peninsula’s isthmus in Southern Fuerteventura. Though the narrow strip of land that separates Costa Calma from La Pared measures just 5km across (the narrowest point of the Island), the contrast between the two places couldn’t be more striking. Set in a dramatic landscape of jagged volcanic mountains, with dark blue foamy waters, La Pared showcases the wild west coast of Fuerteventura. The village is named after the wall (pared is Spanish for wall), that divided the two ‘kingdoms’ of Maxorata and Jandia which were ruled by indigenous kings.

With its wild waters and sandy beaches, La Pared is a great place to learn to surf and there are a number of schools offering classes. The beauty of this dark-sand beach is not to be missed, though the wild waters with strong currents make it unsuitable for swimming. Depending on the wind and surf levels, kite surfing here is possible, although not recommended for beginners.

The beach is split in two parts, the smaller of the two, (known as Playa La Pared) is accessed via the steps from the cliff top (in front of the La Pared Hotel) and ends where the rocks reach into the sea. Take a look to your right on the way down for a spectacular view through a lava arch. The second beach, Playa de Viejo Rey, lies to the south and can be accessed via Playa La Pared during low tide or via the cliff-top path that is marked with large stones. It really is a stunning location and great fun to watch all the surfers (if you aren’t on a board yourself).

There are no facilities on either of La Pared’s beaches, such as toilets, showers, life guards or sun loungers so, ensure you come prepared with water and sun-cream. The access to both beaches is rocky with uneven steps, thus they are not recommended for young children, the elderly or infirm.

Due to its westerly location (the salty air weathers things quickly here), the village of La Pared appears quite scruffy. A general lack of maintenance also contributes to its dishevelled appearance, with a dirt road entrance, untrimmed palm trees, broken street lights and broken or missing paving stones. Surprisingly property prices here don’t seem to reflect its appearance or the fact that most villas, are built very close to one another.

There are a few cafes, restaurants and a mini-market here, though it is only a short 7km drive into the much larger tourist resort of Costa Calma, if the local amenities don’t suffice.
“La Pared powered by Las Playitas”, formerly called “Bungalows Costa Real”, is the only hotel in the area. It is currently managed by the sporty Las Playitas resort complex, located just outside of Gran Tarajal on the east coast.

There are stables nearby, offering horse riding in the area – a great way to sightsee in and around La Pared, and small Golf Academy with a short artificial-grass 9-hole course, putting green and driving range – more suitable for beginners compared to other courses on the island.

Access to La Pared from Morro Jable/Jandia/Costa Calma is via the FV-2 motorway and then onto the FV-605 following the signs for Pajara and La Pared. From the North, follow the FV-605 from Pajara town. 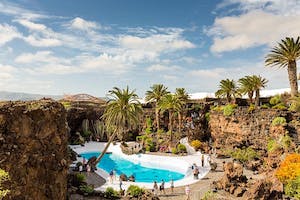